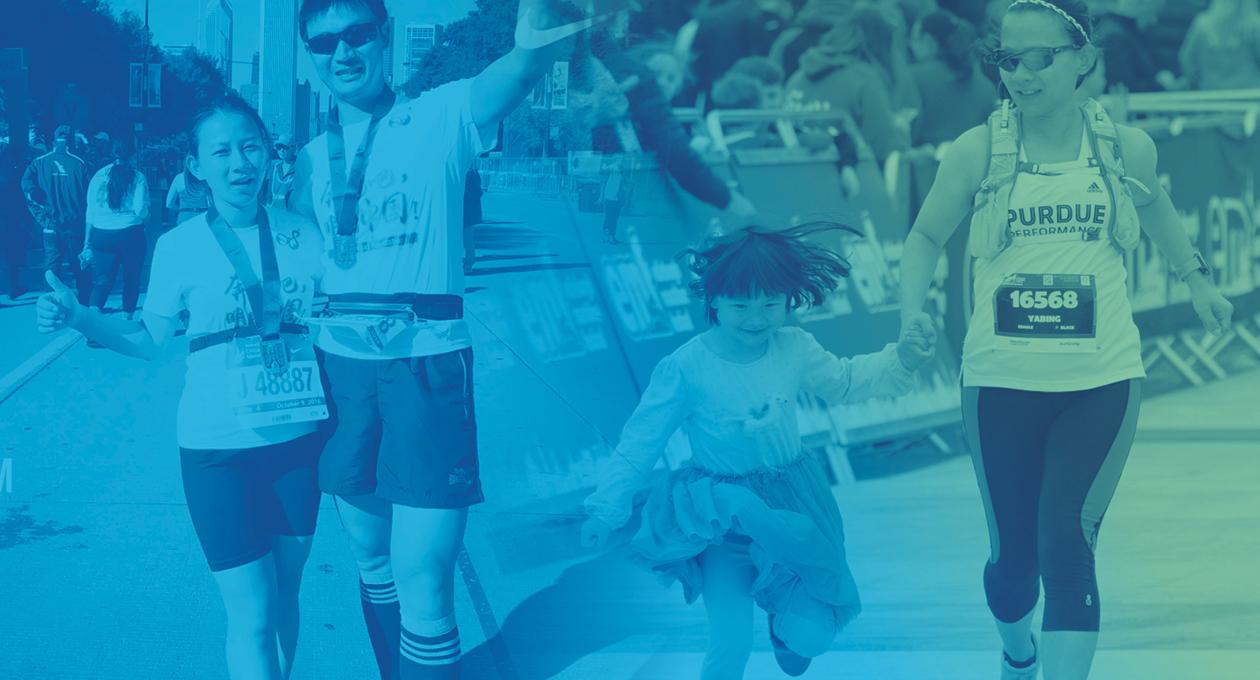 Yabing Wu, Strategic Business Development Manager at Thomas International, was the first woman in China to run a marathon whilst pregnant. Transcending cultural barriers, her achievement attracted media attention and Adidas even made an ad campaign about it.

Now pregnant with her second child, Yabing recently ran another marathon to fundraise for the crisis in Ukraine as part of Thomas’ International’s ‘Marlow to Kyiv’ initiative. To help raise funds, Team Thomas travelled the distance from our HQ in Marlow, United Kingdom to Kyiv, Ukraine and back again, raising thousands of pounds for people facing humanitarian crises in Ukraine. In this conversation, Yabing talks about elevating human achievement by breaking through biases and limiting beliefs.

What made you commit to running a marathon while pregnant?

The Chicago marathon is one of the six major marathons in the world. I was very lucky to get a place the first time I was pregnant, so I didn’t want to give that up. My husband was supportive of me running it whilst pregnant and urged me to Google whether any pregnant women had done this before. It turns out that there was a runner who did the Chicago marathon in 2011 after running for 8 years. She got lots of support and encouragement from her doctor, so it seemed that it was ‘doable’. There is also a book from Runner’s World talking about how to keep running during a pregnancy.

There was a checklist to assess all the risks to assess whether you were suitable to keep running. I followed that guidance. These were the external resources that gave me confidence. I also did a test run beforehand, a half marathon when I was five months pregnant before the full marathon. That also boosted my confidence. As I continued training throughout the pregnancy journey, I was feeling fine, and all the checks were showing that I was really healthy. This got me to the starting line.

The first time I ran I didn’t have the confidence that I would complete the race, as I did the second time, when I knew I could do it. But that first time, I didn’t know what would happen after the half marathon mark. My husband ran beside me. This time around, he and my daughter handed me additional supplements at the halfway mark. I didn’t want to give up who I am just because I am pregnant. Seeing people who had already done it and receiving guidance from experienced runners, all of that gave me encouragement.

However, in China this encouragement was not available. Marathons were quite a new thing in China in 2016. Back then, not many people were running. Not to mention running whilst pregnant. It was far beyond the norm. It was a very personal choice, which my husband supported, which I think is all that matters. Looking back, I think it really shows everyone that there is no difference between races. There is a perception that Asian women are somehow weaker, and that their fitness levels aren’t as good. I think people won’t believe things until they see them. I have started to see a lot more pregnant women in China being more active.

There were so many women were able to be themselves but were too afraid.  Not because they couldn’t, but because they were too afraid that other people would criticise them. So I think this gives other people an example to follow. Many women give up on their goals because being a new mum is so difficult and there’s so much pressure in society to put family first, but actually, when we put our own health first, we’re stronger as women. We can be stronger for our families and better role models. But obviously it’s a case-by-case thing, because for others it could be a lot riskier. I was lucky to have a very low risk pregnancy journey. I did ask myself, ‘What if I miscarry or something terrible happens, can I take the risk?’ and the answer for me was ‘Yes’. I can’t encourage other people to do the same thing I did, but by doing it, I can prove to other people that it can be done.

I took inspiration from the US runner. She did her first full marathon when she was 4 months pregnant and her second just before her due date. She went almost straight into labour after the race and was interviewed by the press. It was a really impressive thing back at that time in the US as well. I can’t imagine running a full marathon that close to my due date. She was incredible. These things make people believe that it can be done. That’s the most important thing.

What do you think other people can learn from your experience?

In the world of running, you don’t set limits. The motto of the Chicago marathon is ‘Be Bold. Be Brave. Be Limitless’. This is relevant for any situation. Whether its work, life, or just running. I think running gives me the opportunity to realise that I can be limitless. Running a marathon is more of a mental game than a physical one. If you believe you can run a marathon, you can. But if you tell yourself that you can’t do it, obviously you’re going to quit. When you face challenges, when you face setbacks, obviously you’re going to feel pain. No matter how good of a runner you are, if you are pushing yourself through your limits, you are going to feel pain. It’s inevitable. But are you going to quit? It’s a very personal choice. It’s psychology that makes you fail. It’s your mind that needs to be strong.

Obviously, many elite runners believe that mental training helps them get a better result. How strong your mind determines how good you are going to be in any sport. I think that probably applies across all walks of life. By pushing your limits, you enter a positive feedback loop that makes you realise that by taking one step at a time, you’ll be able to achieve far beyond what you can imagine. Before I started to run, I couldn’t even run three kilometres. So how could I run 42.195? How can I run it faster? Six years ago, I could never imagine that.

If the goal seems too big to achieve, break it down, and just do it. Don’t think too much. When you are actually doing it, you will get that positive feedback day by day. I think that’s why people fall in love with running. I think it’s the easiest thing to do. It sounds difficult, but it's easier than many other things. Your body will honestly reflect your effort. If you keep at it, you will make positive progress instantly. It’s a very rewarding experience. This is transferable to many other aspects of life. It makes me believe that I can do whatever I want to do.

What do you want to teach your daughters to learn from your example?

Girls and boys used to be educated and treated differently. But I don’t believe there’s any difference between the capability of any gender. It should be the same. How you raise a child determines how they are as an adult. Do they become cautious and conservative, or more brave, courageous, and willing to take risks and take on challenges? I think it’s really important to set an example for my girls to believe in themselves and who they are, regardless of gender. My daughter is very brave.

I don’t want to put a tag on any gender. I think we can all be limitless and unleash our potential. I think it is important to break that bias, and I hope for my daughter’s generation they can just be whoever they are.

I think it's important that my daughter enjoys exercise in general. She told me that when she runs with me, she feels inspired and happy. She knows she was running with me before she was born, and now she sees her sister in my tummy so she can imagine what that was like. I think it’s important to encourage her to be the best version of herself she can be.

How do you transcend social and cultural limits?

Whether or not you conform to cultural norms is a personal choice. If you are mentally strong, you probably won’t care that much what other people think. I receive a lot of positive encouragement. Many people believe that running a marathon whilst pregnant is a great choice. I think that people who criticise me are those who believe they can’t do it. Criticism doesn’t cost you anything, so I didn’t really care that much. I do care about the opinions of my close friends and family. That support means a lot to me, and I probably would have quit without it.   Some people use artificial legs to run. I couldn’t do that, but people do. There are so many physical challenges people overcome in the running world. They are trying to push their own limits. It’s not about how long you run, it’s the determination to finish what you started. I think that’s the most important thing.

Does the discipline of running inform other areas of your life?

Running helps me get organised and achieve my goals. I consider each race as a goal. If you want to succeed, you have to plan 14-16 weeks beforehand and adjust your training plan as you go along. With good planning and execution, you are going to achieve what you set out to. This is a very positive experience because it makes you realise you can achieve anything if you break a big goal down into smaller milestones. You also have to listen to your body. Many things can happen during those long weeks of training. You might get injured or too tired. You must be flexible and scientific with your approach. This experience has helped me to get organised and achieve project goals, which are comparable to a race. It’s also becoming part of who I am.

If you really want to do something, you’ll always find time. I do find it challenging, but I prioritise. You can always find excuses and then time goes by, and you achieve nothing. But if you tell yourself, ‘Maybe I can’t do it all, but I’ll do what I can’. There is a compound effect to your investment of time and effort. In running there is a saying: ‘trust the process’. It’s easy to say that, but if you take a scientific approach to achieving your goal, you are going to do it. In running, as long as you train, you will achieve your goal. In other aspects of life or work there are uncertainties you can’t control. But in running you can always get the reward, eventually. It also teaches me lessons about winning. Winning has nothing to do with racing, most days you don’t have races anyway. Winning is about struggle and effort and optimism, and never, ever, ever giving up.